It’s one thing to renovate or rebuild a house, but when that house is also a boat, it presents unique challenges, which general contractor Bonnie L. Carpenter quickly found out.

Carpenter, of Bonnie L. Carpenter Construction in Emeryville, was tasked in April 2020 with renovating a houseboat (or what she calls a “floating home”) owned by Anna Shimko and Peter Hudson, docked at 18 Main Dock in Sausalito.

“It was very complex, so much wiring and with three bathrooms there was a lot of retrofitting, but we made it all work, it was a challenge,” admits Carpenter, who started her construction company in 1986. “It was the most dense project, in terms of the work, it was challenging in that respect. And it was definitely the most expensive one I’ve worked on, more than $1 million.”

A Queen Anne Victorian in Berekely she worked on in 1990 was equally as complicated and challenging, primarily because of its historical landmark designation: “We had to make it exactly as it had been in the past.”

She was presented with a “Best Restoration” award from the city of Berkeley for that project, but it also established a long-term relationship with Truitt & White, which was located just blocks away from the Victorian.

“Truitt & White was my supplier for all the material, so I’ve had a good relationship with them all along,” she says, including sourcing materials needed for the Sausalito houseboat.

Originally, the houseboat was two levels, two bedrooms and two bathrooms, which Carpenter and a large contingent of subcontractors and other workers, turned into three levels, three bedrooms (including a master suite on top), three bathrooms and four decks, for a total of 1,500 square feet of space.t

While the county called it a remodel, Carpenter deemed it a rebuild because of the extent of the work they had to do. They were able to keep the recycled concrete-and-glass kitchen countertop, kept the Parallam support beams (and built a spiral staircase around it, so they could keep it in place) and a few more items, but basically replaced or rebuilt everything else, including the exterior siding, decks (including an additional roof deck) and much more.

Thankfully, the houseboat was in dry dock at Aquamaison in Sausalito, which has been building floating homes and concrete barges for 30 years, making the work not as challenging as it would have been in the water.

Truitt & White provided all the new doors, windows and hardware, as well as “a lot of plywood and framing materials,” says Carpenter:

In addition to Carpenter’s crew of five carpenters, the project included plumbers, electricians, HVAC techs, siding subcontractors, roofers, gutter installers, engineers, architects, painters, drywall workers, insulators, tradespeople, and one naval engineer, Jim Antrim of Antrim Associates, who consulted on the houseboat’s sponson system that keeps it level and steady while in the water.

Carpenter said that while the permit was pulled in April 2020, they didn’t start work until mid-May because of COVID-19 confusion and concerns. But after all the various rules and regulations of working under pandemic conditions was established, the work was “steady.” The project, save for a few materials awaiting delivery, was done in late-July. And it helped that the owners knew exactly what they wanted out of the final product.

“The owners were great to work with, they were very genuine and easy to work with. They were clear on what they wanted,” she says. “It’s very pretty and pristine.” 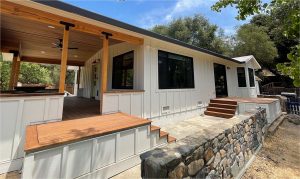